The Universe continues to fill our minds with awe every moment, but the one fact that still fascinates me is the harmony in the Universe. Let me elaborate.
Most of what we know and learn about Nature comes from math. Yes, that subject you probably hate the most. But if math does rule the Universe, it also brings some fascinating results. I am talking about a single number that is found most in Nature. And that number is this: 1.61803398875… better known as the Golden Ratio or Phi. Now we won’t be going too much into the math about where this number comes from but just for the curious, the formula for the number is (√ 5+1)/2.

Anyway, we are here to see where we see this number in Nature. You might not have seen it, or anyone might not have seen it for that matter. Its not that obvious but look closer and we see a Universe of harmony and awesomeness. Before we dive in, lets take a closer look at a key concept that must not be ignored: Fibonacci numbers. They go somewhat like this: 1,1,2,3,5,8,13,21,34,55… Each number is the sum of the previous two. If you divide any two consecutive Fibonacci numbers, you will always get an answer close to the Golden Ratio (the higher you go up in the series, the closer you get to the ratio).

With that out of the way, here are some examples where we see the Golden Ratio in Nature.

1. Flowers:
Not the flowers themselves but the seeds in them. Take a look at this image, the picture of sunflower seeds neatly arranged in two spirals. 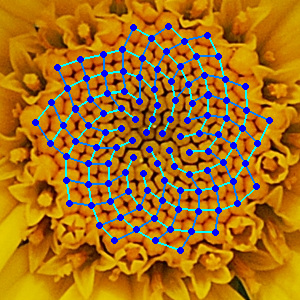 Now count the number of spiral arms in one direction, say the blue arms and divide it by the number of arms in the other direction i.e. green arms. What do you get? Well, we get 1.615… pretty close to the golden ratio. The reason for this is, arranging seeds in this manner prevents any gaps from arising between the seeds. Thus giving a compact arrangement of maximum number of seeds. As a side note, the number of spiral arms of both spirals will always be two consecutive Fibonacci Numbers.

2. Pinecones
Similarly, you count the spiral arms as you did for the flower and you will get a number similar to the golden ratio. Just one thing, divide the bigger number of spiral arms by the the smaller number. 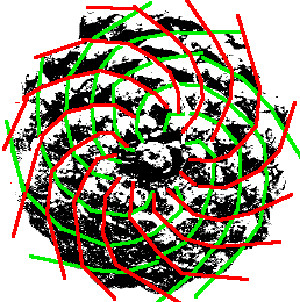 3. The Human and Animal Bodies
The human body is amazing, but when its comes to the golden ratio, it exists here too. It exists on you!!

To find it, find the length of your body from the naval to the floor and from your head to your naval. Divide the bigger of the lengths by the smaller one and you will get something close to the Golden Ratio.

Better yet, the width of the front incisors divided by the length of the lateral incisors is close to the Golden Ratio.

The length of each finger section is roughly 1.618 times bigger than the preceding one.

Animal bodies are also build in similar proportions. The number of female honeybees in a beehive divided by the number of males is usually 1.618!!

4. Tree Branches
If you closely observe a tree branching pattern you will observe that the main trunk branches into 2. Then one of the branches divides into 2 again. This makes a total of 3 branches. As it progresses we see a rather strange pattern as shown in the image below.

Take a look at the numbers on the left. Do they remind you of something? Exactly! its the Fibonacci numbers and you divide any of the the two consecutive numbers you will get something close to the Golden Ratio.

The Golden Ratio or Phi is everywhere!! We just didn’t see it the right way. However, there is more. The number also gives rise to a special shape called the Golden Spiral and this shape too is prevelant in our Universe. It looks somewhat like this:

What is so special about this spiral? Well, if you look at each square inside this rectangle, you notice that the length of each square’s side is equal to a Fibonacci Number. And the spiral is drawn through these squares. And if you divide the length of the rectangle containing the spiral, by its breadth, you get Phi. Now this might seem an arbitary shape but watch:

Take a look at the Nautilus shell. The Nautilus is a sea creature and its shell is a true marvel. You may have figured out why. The Golden Spiral of course. If you’re not content, take another example; hurricanes.

Voila! the Golden Spiral in hurricanes as well. Yes, even those destructive forces of Nature too follow certain mathematical harmonies. Do you think all this is limited to Earth? Let’s take an example that is out of this world. 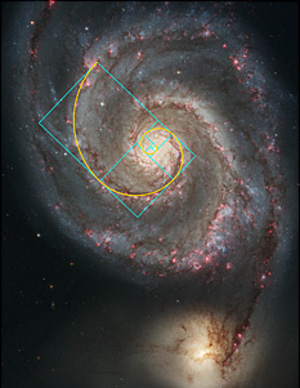 This is the picture of a spiral galaxy called the Whirlpool Galaxy or Messier 51a (M51a) which lies 23 million light years away in the constellation of Canes Venatici. See the arms? Spiralling out from the centre in the shape of a Golden Spiral. Drumroll please!!

By now you must have had a clear picture about the beauties of the Universe. Right down from the smallest seeds of sunflowers to the biggest galaxies, all show the Golden Ratio in some way or the other (remember, the Golden Spiral is related to the Golden Ratio as it is made by squares of sides equal to Fibonacci Numbers). We still don’t know why this is. Some use it as an argument for creationism whereas others take it as the effects of some undiscovered universal law. Whatever the reason, it sure is mindblowing. So next time you curse math below your breath, remember; it not as drab as you make it out to be.

5 thoughts on “Golden Harmony in the Universe”